The temporary Triple Lock suspension has cost pensioners up to £9.35 a week. 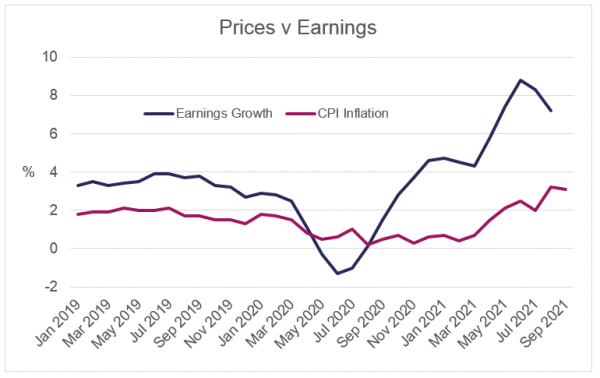 Call it a good day for burying bad news. Within hours of the Prime Minister announcing his long-awaited plans for social care in England in early September, the Department for Work and Pensions revealed that the Triple Lock for the new and old state pensions would not apply next April. This broke a 2019 Conservative manifesto pledge, but by then it was the third pledge of the day to be dispensed with, following the increases to National Insurance Contributions and income tax on dividends.

For 2022 only,the earnings element will be dropped so that there is just a Double Lock. Some wriggle out of the Triple Lock had been expected ever since summer 2020, when several Think Tanks realised the potential consequences of earnings growth distortions caused by the pandemic. However, the Chancellor made no mention of any changes in his March 2021 Budget.

The September CPI figure was published in mid-October, meaning that we now know what the move from Triple Lock to Double Lock has cost pensioners (and saved the Treasury). The earnings growth figure that would have been used (for May to July 2021) was 8.3%, whereas the CPI was 3.1%. That gap of 5.3% is worth up to about £9.35 a week extra on the new state pension (paid to those who reached state pension age after April 2016) and £7.15 a week for recipients of the old (basic) state pension. The savings to the government are measured in billions. Even though the government says the Triple Lock’s suspension will only be for one year, the impact of this year’s Double Lock will endure:

The suspension of the Triple Lock is just the latest example of a government reducing the value of state pensions when they become too costly – the increase in state pension ages is another example. It is also reminder that you should not rely on the state alone to fund your retirement.

The value of your investment can go down as well as up and you may not get back the full amount you invested. Past performance is not a reliable indicator of future performance.